“I think the good in people is never lost,” Koji said. “And it’s never gone from music. Music is an art form that celebrates potential. If you’re looking for it, you’re going to find it.” - February 20, 2012 interview with Gaining Ground Media. Andrew Koji Shiraki is an American artist and activist from Harrisburg, Pennsylvania, USA. He can be seen advocating with organizations such as Resolve and Invisible Children on behalf of the 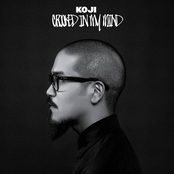 Crooked In My Mind

Into It. Over It.