Real Name: Michael Y. Kim MYK―an MC, DJ, producer and instrumentalist―is a one-man musical powerhouse hailing from the Bay Area. At a young age, he was the lead vocalist and MC for Weekend Sesh, a local band that specialized in hybrid hip hop. After the band parted ways, MYK moved to Seoul, Korea, where he was introduced to Tablo of Epik High. The two immediately connected and began writing music together. MYK is living in Korea, working on his debut album and also continuing to collaborate with artists in the US 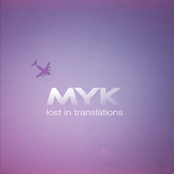